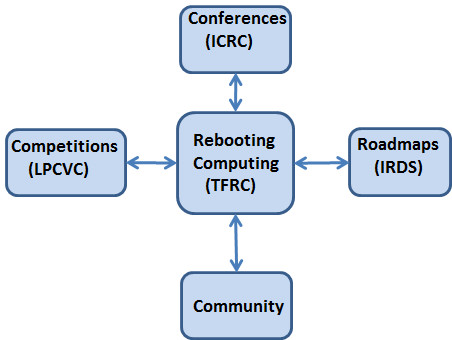 The Task Force on Rebooting Computing (TFRC), housed within IEEE Computer Society, is the new home for the IEEE Rebooting Computing Initiative. Founded in 2013 by the IEEE Future Directions Committee, Rebooting Computing has provided an international, interdisciplinary environment where experts from a wide variety of computer-related fields can come together to explore novel approaches to future computing.

The need for Rebooting Computing follows from the recognition that the exponential improvement in computing performance in previous decades was due primarily to transistor scaling in Moore’s Law, but this is coming to an end. Radical alternative approaches are needed over the entire technology landscape, from basic devices and circuits to architectures to software, with applications from supercomputers to smartphones. Some possible newer approach that are being explored include neuromorphic computing, approximate and stochastic computing, quantum and cryogenic computing, low-power reversible and adiabatic computing, and computing based on non-volatile memories, analog and optical systems.

One alternative approach that has gained much attention recently is Quantum Computing, which spun out from Rebooting Computing as the IEEE Quantum Initiative. But it remains of interest to TFRC as well.

The competitions focused on low-power image recognition, starting with the Low-Power Image Recognition Challenge (LPIRC) in 2015. These were annual international competitions, mostly of student-led teams, some collaborating with industry, with significant monetary awards for the best performance. The key here was to optimize the ratio of accuracy of object recognition divided by consumed energy, and every year demonstrated improved performance. This has recently transformed into the Low-Power Computer Vision Challenge (LPCVC), which included tracks of video as well as still images. This challenge has had major industry sponsors including Google and Facebook.

The roadmaps are built around the IEEE International Roadmap for Devices and Systems (IRDS™), which generates and updates annually a set of roadmaps for various technologies in the semiconductor and computer industries. This follows in the tradition of the former International Technology Roadmap for Semiconductors (ITRS). This maps out current and future trends not only in transistor fabrication, but also in future device technologies such as Cryogenic Electronics and Quantum Information.

The TFRC Community includes the RC Website, a monthly email newsletter, a podcast series, and social media sites. Interested parties may sign up to join the TFRC Technical Community, free of charge.

A new steering committee for the TFRC is being developed, which will include representatives from each of the main components and society sponsors.