Cognition as a Part of Computational Creativity

Computational creativity and cognitive computing are distinct fields that have developed in parallel fashion with some overlap (see Figure). This article looks at the relationship of these two fields in on aspect: the assessment of a computer generated product ('artifact') for its novelty and value. The article addresses several issues of human involvement in computer creativity and cognition - namely, the computer as an aid to a human creator, and the human as the final arbitrator of creativity. 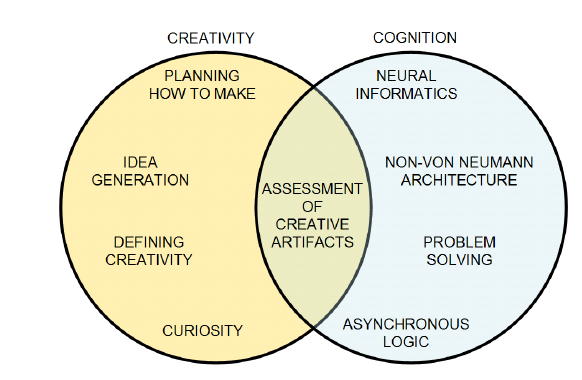 Relationship between computational creativity, and cognitive informatics and computing.

The specific focus of creative action for the purpose of the article is on culinary recipes. In formulating what might be termed the creative engine, sensory and cultural components of foods are considered, along with the domain of food knowledge and prior recipe art. The article outlines the architecture of the computational creativity system

For the creative assessment component, two main factors are considered- 'novelty' and 'flavor pleasantness'. Metrics are proposed to quantify these two factors. A quantification known as 'Bayesian surprise' is suggested as a measure of novelty. The authors report that flavor pleasantness has been shown to be a rather simple measure, which is relatively invariant across cultures, and is approximately a linear property of a food's constituent compounds.

ABOUT THE AUTHORS
The authors are with the IBM Thomas J. Watson Research Center, Yorktown Heights, NY, USA